The Mia Khalifa ecuadorian living in a neighborhood of two streets, called the October 9, was born on the 1st of October in the hospital of the IESS, and on Wednesday, his father spread your name on social networks, making it a celebrity, published the journal.ec.

Their parents are a group of young people called Andrés Zambrano, and Maria Sanchez, his father was so excited by the birth of the drink and by the name you chose, that’subió a photo of the identity card of the newly born in Facebook.

That action was enough to that the social networks are going to burst.

After it became known that who selected the name of the baby was her dad -the mother of the small was not quite in accordance with the same-Andrew commented that you selected, so that your daughter does not pass unnoticed.

Now Mia Khalifa is a youtuber famous and has a line of intimate apparel. 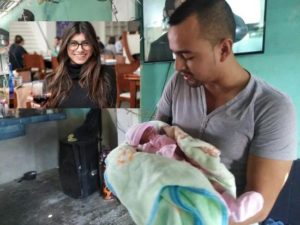 READ MORE:  Amanda Bynes and Paul Michael announce that they will be parents days after their break up and reconciliation

He is a fan of Mia Khalifa, said that by choosing that name, and because of the past of the actress, had many critics, even his mother told him that she did not agree.

What he pointed out, “There is No one in Ecuador that bears that name, is something unique. In Manabí, there are weird names, but none like this”, he added that when the small grow very, very few people will remember the actress. By the bullying also is concerned because they rely on the ecuadorian authorities.

Ended the interview by ensuring that if it had been male, the selected name was Jordi, as an actor in pornographic Spanish.

New discovery! Fossils show how was the evolution of hearing in mammals

Read the review of The Night is one of Them

Kim Kardashian covers the burn and make the followers do not forgive!

Taylor Swift gives$ 15 thousand to two fans who complained about...

Taylor Swift’s saddle and make peace with Katy Perry in the...

The daughter of Kristen Bell and Dax Shepard wears a nappy...

Exitoína · Bella Thorne will receive the award for directing the...