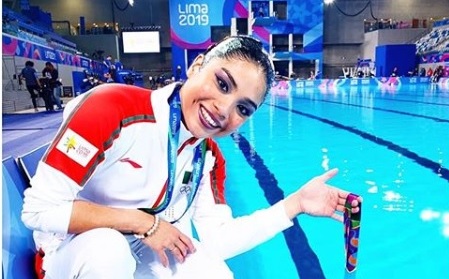 In the West of Mexico Ixchel Teresa Alonso Garcia passed through a video on social networks, and his coach Adrian Loftus in psychological violence and prosecution.

Alonso Garcia access to the video in Instagram, in six minutes, where I said Adrian Loftus for their constant ill-treatment during training.

“Today I decided to make this video around violence, verbal and psychological from who should carry the computer (…) right in front of the whole team I was humiliated, I was told that I was fat, chaparra, and I have short legs“- says the member of the group to swim synchronously.

“And this, as in every man, every woman, has led to the fact that sometimes, thinking of me vomiting. I’ve stopped eating. Only, I think in sweets or bread, again repeating the words she told me that I’m fat that I chaparra”, he stammered.

With the pride of an athlete-a Mexican high-performance, Selected the National Swimming, Art. I’m representing Mexico in the international arena for 12 years and 17 years working in the specialty. • In recent years suffered from the VIOLENCE, verbal, psychological, humiliation constantly, discrimination, and all this led to the fact to have physical damage. All of the above was from the person who has to work. Literally have said several times that I’m fat ,CHAPARRA, and I have SHORT LEGS. Repeatedly he came to humiliate, acosarme and commit psychological violence against me. It all began to influence me as a person haciendome to be very low self-esteem, severe anxiety, severe depression, uncontrolled crying and insomnia. The pair reached dañarme physically, causing BLEEDING WAS the STOMACH and ANAEMIA EFFICIENCY$. • The club online (Mexican Swimming Federation) and even the same Federation President Kiril Todorov, a long time ago, knowing all the bullying that she endures in the team. • • My goal in this film is the search for CHANGES, I love my country and believe in the potential, but for things like these DREAMS are broken MEXICAN. I don’t want no one to feel how I feel in the moment and less I want someone more lively than what I lived. • #niunatletamas #niunaatletamas • #woman #GPI #8m #equality #feminist #Patriarchy #girlpower #niunamas #noesno #feminism #niunamenos #mexicanandproud #stereotypes #violenciadegenero #womensrights #diadelamujer #niunpasoatrasenigualdad #artisticswimming #natacionartistica #nadosincronizado #Dating #violenciaalamujer #discrimination . @eluniversaldeportes @eluniversalmx @reform @estoenlinea @nelsonvargas_mx @aristeguionline

In addition, he assured that The Mexican Swimming Federation this agreement with the facts, but was ignored.

“All this is already known, the The Mexican Swimming FederationThe President Of The Russian Federation, Kiril Todorovnot set high for all the persecutions that have been made in this discipline,” said Teresa, who raised their voices to avoid that every other girl suffers the same damage that she did.

Teresa Garcia Alonso in addition, he noted that the husband Loftus responsible for the Department of psychological assistance of the computer, and this creates an atmosphere of fear.

“Like all computer high performance, we have individuals, responsible person, nutriólogos, doctors and the important part here, a psychologist. But in our team, which is responsible for our mental health, is her husband. For what he has created there an atmosphere of fear and repression, because, well, of course, that we can’t say anything about what’s going on,” he said.

Among other charges, Alonso Garcia he noted that the bonus which was awarded by President Andrés Manuel López Obrador he asked half.

participated in various events and achieved good results, such as The pan American games in Lima or Discussed Barranquilla 2018.

Joseph - August 4, 2020
0
New records for the singer-songwriter one week after the release of "Folklore", eighth album of unreleased albums published on July 24th The copies sold in...