Washington, July 20, 2020 – The numbers of the Coronavirus pandemic do not stop growing, there are 14.5 million confirmed cases worldwide , writes Johns Hopkins University, while the dead salgoni to more than 605 thousand . There are currently 14,457,916 infected, while 605,205 are victims. The United States continues to be the most affected country with over 3,773,206 infections and more than 140,534 deaths, while its president, Donald Trump , perhaps confused, in an interview, however, proposed that in the US there is the death rate more low in the world. The epidemic continues to claim victims in Brazil and India,where cases grow every day. And while China now has only 22 cases and zero deaths, there is a worrying recovery in other countries such as Japan and Australia, and weak signals also in Europe warn that Covid-19 is not yet defeated. In France, Health Minister Véran said that “there are 400-500 outbreaks in the country “ , and sees signs of recovery. The situation in Africa is desperate and not quantifiable, where South Africa seems to be the most affected country on the continent, but it is also the best equipped to record the trend of the disease in the population. 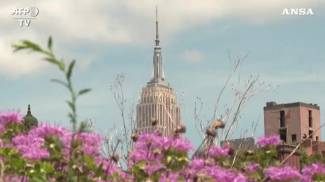 The United States has experienced 63,872 new cases and 574 deaths in the past 24 hours. The overall Covid-19 toll is now over 3.7 million cases and 140,474 victims. Despite this, President Donal Trump slipped on an American mortality rate in an interview. “When it comes to mortality rates, I think it’s the other way around, we have one of the lowest in the world”, he said incorrectly in an interview with FoxNews. Trump also reiterated that the United States is “envied” for the large number of swabs made. The president now also has to deal with over 1,200 members of the National Academy of Sciences who in a letter accuse him of a “disparaging” approach towards “scientific competence”, thus defending virologist Anthony Fauci, branded by the tycoon as “a a little alarmist “.

There are 23,529 new cases in Brazil , local authorities reported, bringing the total budget to 2,098,389 infections. The victims are instead 716, for a total of 79,488 deaths. The second most affected country in the world has a total of 2,098,389 cases, and 79,488 deaths. A slight hope comes from the fact that for the second consecutive day the number of deaths was less than a thousand. The most affected state is that of Sao Paulo, the most populated, with 19,732 deaths and 415,049 confirmed cases. Rio de Janeiro follows with 12,114 victims and 138,524 cases. Hundreds of people gathered in Brasilia to demonstrate their support for the Brazilian president, Jair Bolsonaro, quarantined after contracting the virus. The Brazilian Citizenship Minister, Onyx Lorenzoni, also reported on social media that he had tested positive for the Covid-19 buffer and had started taking hydroxychloroquine. He is the fourth positive minister. 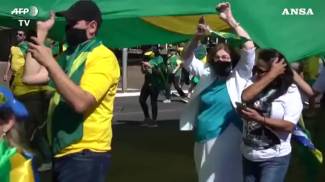 In India, the positives at Covid-19 continue to increase: in the last few hours, over 40 thousand new cases have been recorded , a new daily record. One million (1,077,781) cases were exceeded in the country. Authorities say the death rate has dropped below 2.5%, “one of the lowest in the world”. In the capital New Delhi the most serious outbreak.

French Health Minister Olivier Véran is worried: “We note that there are disturbing signs of an epidemic recovery on the national territory”. The minister on France info cited “between 400 and 500 outbreaks of Coronavirus”, and stressed that “beyond the number of outbreaks” it is necessary to look at the “routes of infection” that have occurred, especially in closed places. He then reiterated the need for the obligation to wear the mask in closed public places.

A young man has horrified a crazy game for charity for Covid-19 patients to be played among infected against healthy in Pamplona. The 23 year old was sued for violating containment measures and will pay a fine of up to three thousand euros. But it turned out that the young man had already organized a game in June that had been attended by several hundred people. Meanwhile, it is not only Catalonia that worries Spain about the recovery of the coronavirus: new outbreaks are also registered in other regions of the country after yesterday the Catalan authorities ascertained 994 infections in 24 hours, the majority of which, 698, in the area Barcelona metro. The alert is growing in the regions of Andalusia, Navarra and Mursia.

In Germany there are 249 new cases, which brings the total contagion balance to 201,823. There were also two new victims: 9,086 deaths since the start of the pandemic.

The British government has announced that it has concluded an agreement with the pharmaceutical companies BioNtech, Pfizer and Valneva to obtain 90 million doses of a possible coronavirus vaccine . These are joined by the 100 million doses that the University of Oxford is developing in collaboration with the AstraZeneca company.

In Russia, the total number of infections is 770,311, and it is the fourth country in the global contagion ranking. According to the Tass agency, today for the first time since April 29, the number of cases registered daily is less than 6 thousand. The deaths in the country reached 12,323, eleventh place on the global casualty map. Today Bloomberg agency on the web, citing some sources, makes accusations against the Russian leadership: “Several members of Russia’s business world and political elite have had early access to a vaccineexperimental against Covid-19 “, reads on the website:” the top managers of companies such as the aluminum giant Rusal, as well as billionaires tycoons and government officials have started to obtain doses developed by the Gamaley State Institute in Moscow as early as April “ A mole, a researcher whose name is not provided by the newspaper, revealed that the experimental vaccine was administered to hundreds of people and the agency confirmed the identities of dozens of them, who however preferred that their names were not disclosed. Kirill Dmitriev, head of the Direct Investment Facility, admitted that he was among those who received the vaccine.

Moscow was quick to clarify that Russian President Vladimir Putin was not vaccinated against Covid-19. Kremlin spokesman Dmitri Peskov said the vaccine “has not yet been certified” and “I think it would not be good for a head of state to use an uncertified vaccine.”

The director of the translational medicine and biotechnology institute of the Sechenov Medical University, Vadim Tarasov , also rejected the Bloomberg hypothesis : “We conducted the pre-clinical and clinical tests. The remedy has not yet been registered. The ministry della Salute will rule on the registration in days “and the potential vaccine” will be available for general use only after registration. So – added Tarasov – let these rumors remain on the conscience of those who released them. They could be mere speculations “.

In 24 hours at least 510 people contracted coronavirus in Japan , of which 89 have been confirmed in Osaka, which has experienced its highest level of infections since the beginning of the epidemic. In Tokyo, on the other hand, 188 infections, a quota that fell below the 200 infection threshold for the first time in four days. No victim for Covid-19. Positive the young pop singer of the AKB48 group, the 23 year old Takita Kayoko.

The alert for the Australian state of Victoria continues , where 275 new cases have occurred in the past 24 hours. State Prime Minister Daniel Andrews said that only 28 of these belong to known outbreaks, and that analyzes are ongoing. One dead man alone, which brings the overall death toll from coronavirus in Victoria to 35.

In Mexico almost forty thousand deaths (39,184) since the start of the pandemic, with today 296 new victims. The number of infected people has risen to 344,244, of which 5,311 only in the last 24 hours. In Ukraine there are 651 new cases. The total number of infections rises to 59,493. There are 1,498 dead, 13 of whom died in the last hours. China 22 new cases, of which 5 imported (three in Sichuan, one in Inner Mongolia and one in Shandong) and 17 of domestic cases, all in the northwestern province of Xinjiang, the country’s last outbreak. The total number of infections is 83,682