Global coronavirus infections are over 15 million, according to a Reuters count. The total is 15,009,213 cases, three times more than the number of influences recorded each year, according to data from the World Health Organization, while the death toll of over 616,000 in seven months is approaching the upper death toll annuals for flu. The global tally reached the tragic milestone after India, which has the third largest number of infections in the world behind the United States and Brazil, reported nearly 40,000 new cases in its daily update.

Donald Trump thinks about it and asks the Americans to wear the mask to stop the coronavirus ‘run’. “Unfortunately, it will probably get worse before it gets better,” admitted the American president as the United States touched 3.9 million infections. The tycoon, at the first briefing of the White House task force for weeks, appeared on television without Anthony Fauci , the epidemiologist with whom he has been in controversy in recent days, who would have told CNN that he had not been invited: “What the masks you like them or not, they have an effect – he said – they will have an effect “. Then he reiterated that he was working “with the governors” and, defending the work of his Administration, he added: “I think we are all responsible” 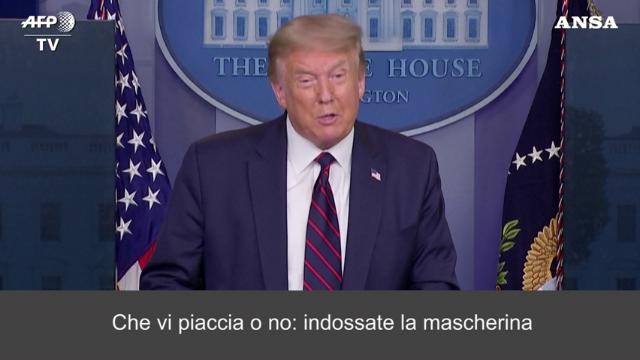 Over 1,000 people have died in the past 24 hours. It is the first time since June 9 that this threshold has been exceeded. The New York Times reports . Although it is a high figure, it is a much lower number than the record of 2,752 deaths in 24 hours recorded on April 15th.

Colombia, lockdown in the capital

The mayor of the Colombian capital Bogota, Claudia Lopez , has announced the extension of the confinement to five million people, given the aggressive spread of the virus and the government’s refusal to authorize a total quarantine in the capital. Since July 13, when the health crisis has worsened, the city of eight million inhabitants has been subjected to confinement by the municipalities, which each have about 2.5 million inhabitants. However, the mayor extended the measure to cover more people from 23 July to 14 August.

Palestinian climbs the hospital wall to say goodbye to her mother

The 73-year-old woman with leukemia and then Covid died immediately after the unexpected visit of her son. The image that portrays the young Jihad al-Suwaiti on the windowsill of the hospital where their mother was hospitalized, has made the rounds of social networks, moving the world. The 30-year-old from Beit Awa, a city in the West Bank, climbed the walls of the hospital in Hebron, managing to appear in the intensive care room of Rasmi Suwaiti. The woman died Thursday evening. “I sat helplessly outside the window to see the last moments of my mom’s life,” al-Suwaiti told the Arabic Post . The hospital had not agreed to let him enter the ward for security reasons.

Record of cases in Israel

1,977 people tested positive for coronavirus in the last 24 hours, out of over 27,000 checks performed. Never so many in a day since the start of the pandemic. This was confirmed by the Ministry of Health. There are currently 31,313 ‘active’ cases, with 259 patients in “serious” conditions. Three other Israelis died of complications related to Covid 19 and the death toll rose to 430 out of a total of 54,663 infections since the beginning of the emergency.

The situation in the world: graphs and maps