Other than reading books, kneading yeast and watching TV series

. During the lockdown Taylor Swif t got busy in the studio, the result is an album announced a little while ago and available from midnight: Folklore . Written primarily with National’s Aaron Dessner , the disc contains 16 songs. Including a song in collaboration with Bon Iver ( Exil ), and The Lakes , a bonus track present only in the deluxe physical version. The other authors are Jack Antonoff , former collaborator of Taylor Swift’s last three albums, and William Bower.

Since this is the singer ‘s eighth disc , to celebrate the event the special versions include 8 deluxe CDs and 8 deluxe vinyls (available only for a week). Each with unique cover and photos. Also at midnight the video of the first single Cardigan will be released , written and directed by Swift herself. Filmed how? In full compliance with the anti-Covid health regulations: «The whole shooting was supervised by a medical inspector. Everyone wore masks and I did my make-up, hair and styling myself ».

Taylor says in the launch tweet that in Folklore ” I poured all my whims, dreams, fears and reflections into it “. Adding what we all think since coronavirus is part of our days, and that is that in a different period from that we are experiencing, he would have considered with much more shrewdness when to publish a new album, a perfect period . But times remind us that nothing is guaranteed: “My instinct tells me when you do something you love, you should simply spread it around the world.” In short, you are here, who knows tomorrow . 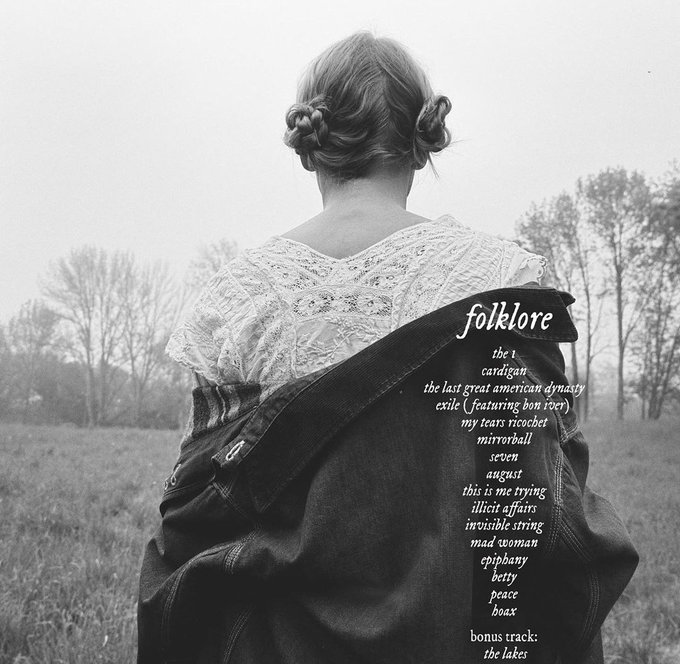 From the black and white images of the cover and inside of the CD , country style but dry, grainy and a little foggy, the musical direction seems to be the reflective and minimalist indie-rock of which one of the collaborators of the album is master: Bon Iver . A sharp deviation from Lover’s glitter , from his sugary but also committed imagination that he fished from musicals, essentially pop. Now Taylor goes through bare woods in the middle of August , fleeing the city, like many people who during the quarantine took advantage of nature and its invigorating action.

The “2020 that we can’t wait to end” has therefore pushed Taylor – it would seem – into the symbolic universe of many American singer-songwriters specializing in the intimate genre: from Lucinda Williams to Nathalie Merchant . And in the web’s haste to find comparisons and confirmations, the repechage of the photo of Andrei Tarkovsky in the middle of the woods in 1979 does not appear at all like a mirror game . Plus an elective affinity.

Know His Diet And Exercise Routine To Be Like Thor

‘I come from a Black and Jewish household’

The benefit regarding the buying in addition to advertising robotic for...

Know His Diet And Exercise Routine To Be Like Thor