The first warning came from Jerusalem as early as May : schools reopened without the obligation to wear a mask , with air conditioning and crowded classrooms . The result: more than 22,000 students and teachers in quarantine and classrooms closed again . Now the first news of outbreaks in the classrooms comes from the US , where some states have decided to leave and were immediately forced to reverse : this is the case of an institute in Indiana , but also of a high school in Mississippi . Given what happened, Marylandchose to stop the start of the school year in attendance for private schools in Montgomery County. Even Barron Trump , the youngest son of the president who attends St. Andrew’s Episcopal School, will start with distance learning. A little further south, in Mexico , the same solution was chosen: the school year will start on August 24th but remotely.

What happened in Israel , as reported by the New York Times , is a compendium of mistakes not to be repeated. It took just 10 days to return to closing hundreds of schools. After the lockdown in March and April, Jerusalem had decided to return students to class from May 17. On the same day in a high school in the capital, Gymnasia Ha’ivrit , a mother denounced her son’s positivity . The next day another case among the pupils, not connected to the first: closed school and buffer for all. In the end more than 150 studentshad the coronavirus, as well as 25 teachers. In a cascade week the same scene was repeated, with lower numbers, in other schools in the country, from Tel Aviv to Eilat.

A report on Eurosurveillance , cited by Repubblica , explains the reasons for the outbreaks that broke out among the schools. First of all, the failure to comply with the spacing rule : in many schools the classrooms were not spacious enough to contain, with due precaution, classes that in Israel can even number 38 students . In addition, also due to the heat, the pupils were exempted for a few days from the obligation to wear a mask , while in the meantime the air conditioning was used.to refresh the classrooms. Finally, it was decided to continue using the school buses, as well as to resume with physical education classes.

If what happened in Jerusalem dates back to May, the cases of outbreaks in classrooms and schools forced to close a few days after the reopening are much more recent in the United States . On August the superintendent of Elwood Community School Corporation , Indiana, he wrote to students and parents: “The first two days of school fantastic !”. The first cases of coronavirus positive employees of the institute emerged from the next morning and the classes were closed: we return to online lessons. Greenfield Central Junior High School , also in Indiana, risks the same end : as reported by the NYT, after the positivity of a boy, the two-week quarantine for all the students who came into contact with him started. Similar situation also in Mississippi , where in a Corinthian high school an entire class is already in quarantine a few days after the school reopens.

The latest case concerns Georgia : an elementary school in Cherokee county was closed after a child tested positive for Covid at the resumption of the school year. The teacher and twenty classmates ended up in quarantine for two weeks, but the other students will also remain at home pending sanitation. Recent developments have instead convinced the governor of Maryland, Larry Hogan , has a reverse even before classes resume: the private schools in Montgomery County, among the most prestigious in America, will have to start the school year remotely . Remote lessons also for the 350 thousandkids who were ready to go back to school in Chicago , the country’s third district. 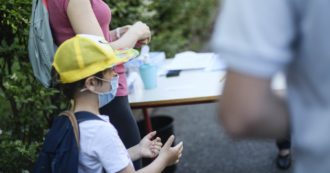 Kindergarten, guidelines: from games to snacks, what changes for children

It is the same decision taken by Mexico’s Minister of Education, Esteban Moctezuma : the start of the school year has been set for August 24, but it will not correspond with the return to class for 30 million students. Moctezuma, in fact, is convinced that it is not safe to reopen schools with the pandemic still in progress and has decided for plan b: there will be four private broadcasters to broadcast the lessons via radio and TV and, the minister said, there will be 4,550 television programs and 640 radio programs in Spanish and 20 other indigenous languages. Computers will also be used , but they are not as widespread as television. Some school programs include lessons via email, WhatsAppand virtual classes on Zoom .