iPhone 13, new iPad … Our summary of the conference

KEYNOTE. After a little over an hour of presentation, Apple presented several of its major products that will be in the news for the months to come. Return on the announcements of the evening with in particular the new iPhone 13 and its different versions.

As is often the case for several years, Apple has already planned the release of its new iPhone 13. The latter will be available for pre-order from this Friday, September 17, for availability set for Friday, September 24. Pre-orders will be available on the official Apple website, but also other official resellers like Amazon or Fnac who will soon communicate on this subject.

You want to acquire one of the new iPhone 13 unveiled during this Apple Keynote 2021, but you already have an Apple device? The brand offers its users to take back their old phones at fairly competitive prices. The price of the recovery will depend in particular on the storage capacity of your device, as well as its condition, but the company already gives a price range:

9:30 am – Mixed feedback from the Apple community

With just over an hour of presentation, Apple was expected at the turn. If the company will have some nice surprises in store with the upcoming arrival of a new generation of iPad and iPad mini, it is disappointing with its main star of the evening: the iPhone 13. The latter still does not include a USB charger. -C (as is currently the case with many other competing devices and even Apple), or faster charging.

Only several points seem to have been improved compared to the previous generation, of which the iPhone 13 uses the majority of the codes by improving them.

Apple took advantage of the Keynote conference to unveil the new iPhones to come for the end of 2021. These are available in different versions, as was already the case with the iPhone 12 last year. Here is the main information:

It is a bet that Apple is launching for this new season. The iPhone 13 and 13 Pro Max aim to respond to ecological concerns and have a minimal impact on the environment. In addition to the technologies used inside the device with recycled materials, packaging will also abandon plastic. For example, Apple plans to reduce its plastic use by 600 tonnes. As a reminder, the apple brand planned to completely eliminate plastic before the year 2025.

The iPhone 13 will not be the only novelty for Apple smartphones. An update, iOS 15, is also expected on Monday, September 20.

With two revised photo sensors, Apple promises the best photo experience for its new iPhone 13. This announcement is also accompanied by the revelation of an iPhone 13 mini which will also have improved photo sensors! In particular, they will allow more light to be captured.

Drum rolls … we finally know the release date of the iPhone 13 and iPhone 13 Pro. Both new phones will be available for sale starting Friday, September 24.

It was not until the end of Apple’s Keynote to discover the new prices for the iPhone 13 and its different versions. The prices for this new smartphone from Apple do not surprise much:

The prices displayed depend in particular on your storage space needs. Note that the most advanced version, the iPhone 13 Pro Max with 1TB of storage space, is available for € 1,839.

The 6.1-inch iPhone 13 and the 5.4-inch iPhone 13 mini both have diagonal cameras, a ceramic faceplate. They are available in five new colors: pink, blue, midnight, starlight and red. They are both equipped with the famous A15 Bionic chip which includes nearly 15 billion transistors with a 6-core processor. It is the fastest processor of all smartphones, says Apple. Up to 50% faster than the most advanced competition. Apple also praised the merits of its new battery, which can last up to 1.5 hours more compared to the previous generation. 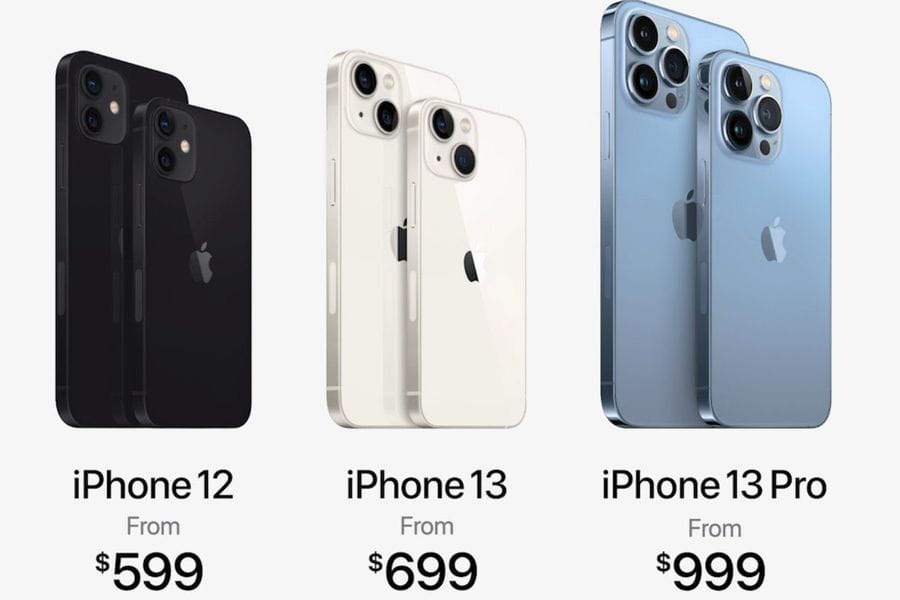 Despite very disappointing sales for the iPhone 12 mini, Apple decided to try the experiment again by announcing an iPhone 13 mini. The latter has the same characteristics as its classic version, but in a smaller size, in order to be easy to store and use. It is also available in several colors, as is the case for the classic version namely pink, blue, midnight, starlight and red.

The iPhone 13 mini is fully compatible with 5G communication networks, and should benefit from iOS 15 when it is released. Launch of pre-orders on Friday September 17 for availability from Friday September 24.

These new iPhone 13 Pro and Pro Max will be available in graphite, gold, silver and alpine blue colors with a storage capacity of 128 GB, 256 GB, 512 GB or 1 TB (capacity reserved for the Pro Max). They can be pre-ordered from Friday, September 17 at 2 p.m. (French time), for availability from Friday, September 24.

These were the two big surprises of the evening: Apple took advantage of the Keynote to unveil new versions for its sentences tablets, the iPad and the iPad mini. These will benefit from a new processor much more powerful than on the last generations, new cameras for even more realistic shots, and a revised and improved battery, while becoming compatible with 5G communication networks.

It was expected for some leaks on the internet, the new Apple Watch Series 7 was unveiled during this Apple Keynote 2021. Its first major innovation is to have a larger screen and almost without borders so that you can enjoy more of the text content on your watch. Users of this new version will be able to count on an autonomy of 18 hours and a recharge 33% faster compared to the previous generation. It also becomes the very first Apple Watch to achieve IP6X ratings for dust resistance and WR50 for water resistance. Available this fall starting at $ 399.

PS4: major issues with update 9.00 reported, how to fix them in the event of a crash

Something just crashed on the planet Jupiter