Although genetic transmission mechanisms, common to attention deficit hyperactivity disorder (ADHD) and Alzheimer’s disease, are far from being demonstrated, a team of Swiss researchers has just reported an association between these two diseases. , by studying a cohort of more than two million people linked to their biological parents.

Attention deficit disorder with hyperactivity is an infantile behavioral disorder that can persist into adulthood. This pathology affects 5% of children worldwide and 2.5% of adults. It is characterized by inappropriate symptoms of inattention, impulsivity and motor restlessness (hyperactivity). The Alzheimer’s disease is a neurodegenerative disease characterized by cognitive impairment, loss ofautonomy leading to the dementia. It is linked to aging and can appear from the age of 60 (prevalence between 5 and 7% worldwide in people aged 60 and over).

What is the role of heredity in ADHD and Alzheimer’s disease?

Attention deficit hyperactivity disorder (ADHD) is a neurological disease complex and many factors contribute to its occurrence. It’s a hereditary illness and it would seem that several Genoa intervene in its development. Moreover, the share ofheredity in the Alzheimer’s disease remains rare with less than 1% of cases linked to a cause genetic (mutation of certain predisposition genes).

The potential mechanisms of the association between these two pathologies have not been demonstrated, especially as the diagnostic ADHD is difficult even though awareness and knowledge of the disorder has increased in recent years.

The hypothesis of a common inheritance has been put forward, although no joint genetic variant has been demonstrated. However, a 2015 study published in American Journal of Medical Geneticssuggests that a nucleotide polymorphism may play a role in the molecular basis of adult ADHD. In addition, these variations would be located in or near genes involved in the processes of neurodegenerative diseases. 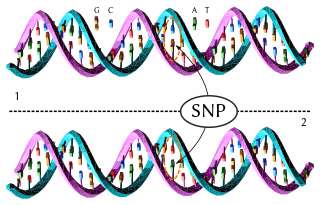 Diagram of nucleotide polymorphism: variation of a single base pair of the genome. © David Eccles, Wikimedia Commons, CC by-sa 4.0

A link between attention deficit hyperactivity disorder and Alzheimer’s disease

A study of cohort multigenerational was carried out in Sweden and published this month in The journal of Alzheimer Association. The aim was to examine whether older parents of people with ADHD were diagnosed with dementia. Based on various national registers – reporting births, data on patients and treatments, and deaths – more than 2 million people born between 1980 and 2001, of whom more than 3% were diagnosed with ADHD, have been followed. These people were then linked to their biological parents (parents, grandparents, uncles and aunts) in order to observe the potential family associations between ADHD and Alzheimer’s disease.

Although no cause and effect relationship was demonstrated in this study, mechanisms explaining these associations are suggested by the authors. Genetic variants that have not yet been demonstrated, environmental risk factors or the impact on health physical caused by ADHD which may in turn promote dementia are all hypotheses made in this study. The researchers also evoke the interest of exploring these different avenues in future research.

A Mozart sonata against epilepsy? Why researchers believe it

Covid-19 in Occitanie: 15 new deaths and 238 patients in intensive care this Friday evening