Deontay Wilder was medically suspended 6 months after his new loss to Tyson Fury. The American had finished the fight in a bad state.

Hard blow for the “Bronze bomber”. Beaten a second time in his career, and once again by the “Gypsy King”, the former WBC heavyweight champion will have to wait at least six months before returning to the rings. Blame it on this suspension imposed by the Nevada State Athletic Commission.

KO’d at 11e round after being knocked down several times, Deontay Wilder ended the fight with a broken hand but also a broken lower lip and bleeding ear. A fight of incredible violence that will leave him on the side for a little while. He will also have to have an operation.

It is precisely because of his injuries that the commission suspended him until April 8. A good thing for him to be able to recover physically from this historic trilogy during which he chained three fights without a victory. 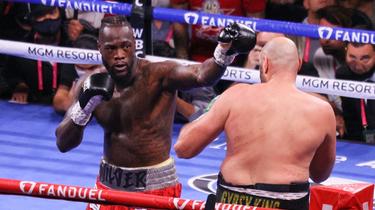 “He’s recovering and, if all goes well, he’ll probably be looking to get back into the ring in the middle of next year, April or May,” Shelly Finkel, his co-manager told The Sun.

Note that Tyson Fury has also been suspended for 45 days. The Briton, who should soon find Dillian Whyte (or Otto Wallin depending on the result of the fight between the two men on October 30), was sent to the ground twice by Wilder.

Previous articleBreakdown on the CAF site: what happened?
Next articlewhat he (really) thinks of Jenifer

A loss of 150 million euros for OL Group, a “first” for five years

Neymar tells about his crazy common ambitions with Lionel Messi